When there aren’t any live sports and there won’t be for a while, you have to get creative. I was hoping right now I’d be writing something in advance of the Frozen Four (hopefully with Boston College in it). But, with no real life tournament, I had to make one up. Today we’re going to crown the GOAT of college hockey. One thing I love about Hockey East is that every team is or has been great.

Sure there are the powerhouses on Comm. Ave., but other teams have had their shining moments as well, if only for a few seasons. Maine has two national titles, and Providence one. New Hampshire once went to overtime of the national title game, and UMass was playing for a national championship just last year. Even Vermont, the doormat of Hockey East over the past couple seasons, has been to the Frozen Four twice.

So I set out with one goal: find the best single season in Hockey East history. To do that, I’m going to go through a bracket-style tournament with each team’s best season (chosen by me, so you may disagree with some of the choices).

To make things simpler and allow every team to be in the bracket, I added in Notre Dame, even though both the Irish and Hockey East probably wish to forget the unceremonious four-year stint as part of the conference.

First, a few ground rules. The teams can only come from their respective times in the Hockey East. That means the 1948-49 BC team that went 21-1 won’t be on here. Neither will a season from Notre Dame’s time in the CCHA or Vermont’s ECAC tenure.

Next, the teams were ordered based on how they finished during the 2019-20 season, because there was no simple way to order teams across generations. Notre Dame played the same amount of conference games as Hockey East teams, so I just slotted them in at seventh using their Big Ten point total.

The format will follow the old Hockey East playoff bracket with four opening round games before the quarterfinals start. Here’s how the tournament looks: 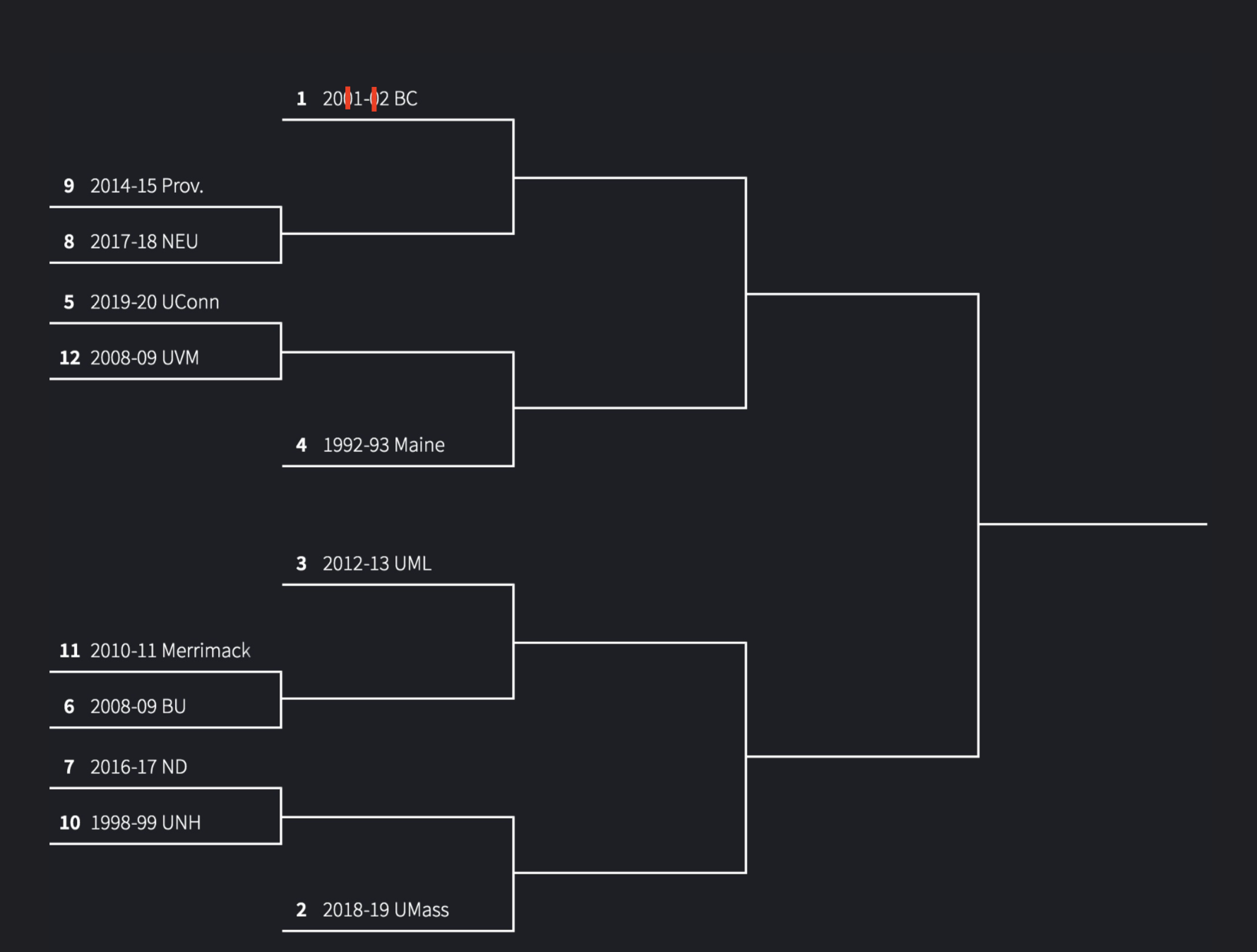 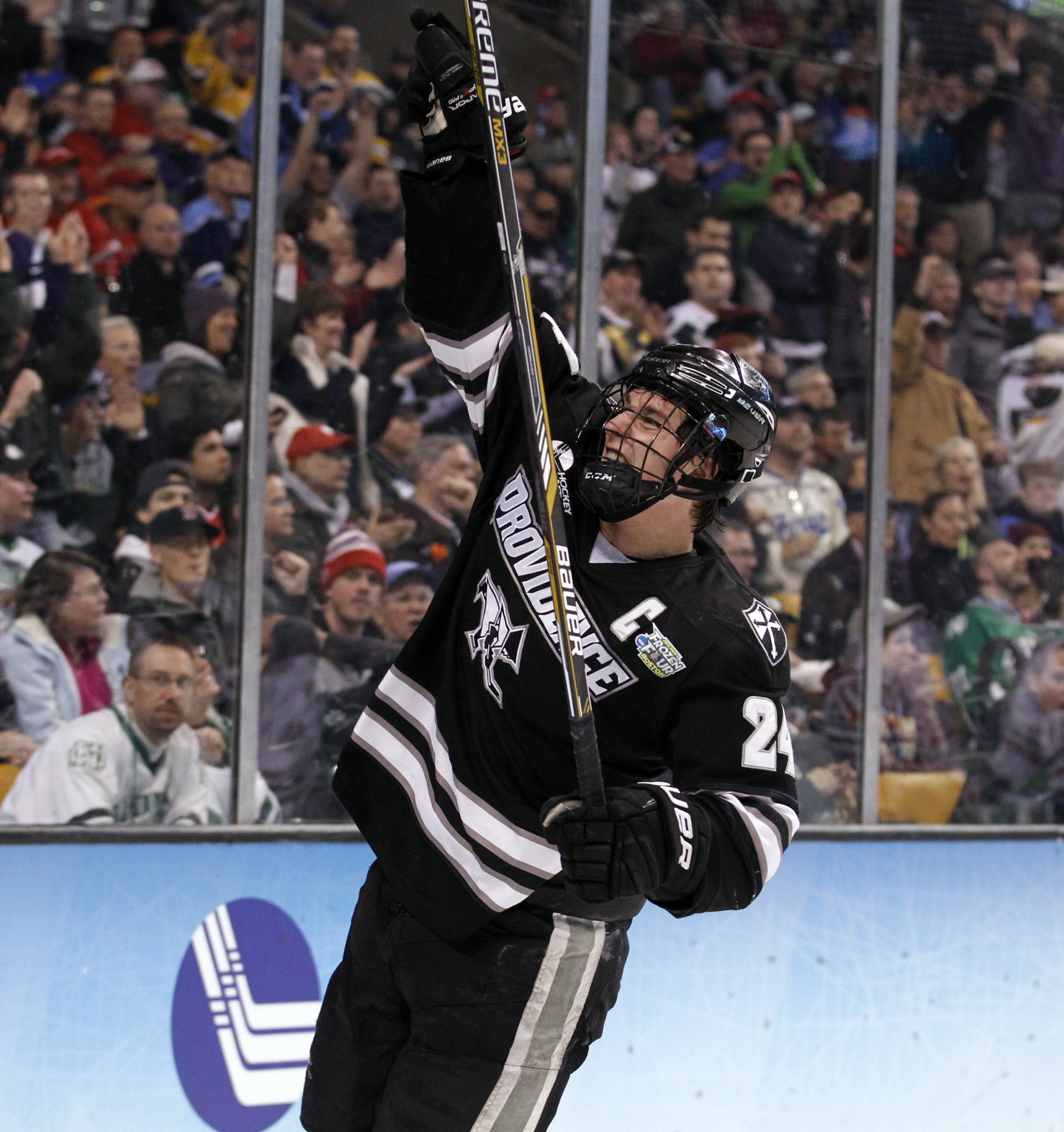 Noel Acciari captained the Friars during their National Championship season.

Northeastern has won three of the the last five Hockey East championships, and this isn’t one of those teams. The 2015-16 and 2018-19 teams were good options, but the 2017-18 team was the most talented. Adam Gaudette, Dylan Sikura and Nolan Stevens formed the best line in college hockey; Gaudette and Sikura finished first and third in the nation in scoring, respectively. Gaudette’s 30-30 season helped him bring home the Hobey, the first such occurrence in program history. This team also won the Beanpot for the first time since the 80s, kicking off a Huskies three-peat.

The Friars were actually a slightly better team record-wise the following season, but for a program with one National Championship, it’s hard to pick any other season than 2014-15. A second place finish in Hockey East earned Providence a No. 4 seed in the Regionals. In their four-game run to the title, Providence averaged almost five goals per-game and knocked off two No. 1 seeds and two No. 2 seeds. In one of the wackiest endings in tournament history, Providence came from behind and scored two goals late in the third to defeat Boston University at TD Garden for the National Championship.

Northeastern may have had the better line, but Providence was deeper and had a hot goaltender in Jon Gillies. The Friars advance.

This is the “I-had-no-other-options” matchup. UConn has never made the NCAA Tournament and only joined Hockey East in 2014. This season, the Huskies finished with a .500 record, their best mark since becoming a member of the conference. The national consensus was that the young Huskies still needed another year of development before really competing in the 2020-21 season, but they exceeded expectations and are in prime position to secure their first tournament berth next season.

Vermont finished 2-18-4 in conference play this season, good for one of the worst seasons in Hockey East in recent memory. But the Catamounts have had their moments of success since coming over from the ECAC following the 2004-05 season. Led by Viktor Stalberg, UVM finished third in the conference in 2008 and advanced to the Frozen Four. They fell to BU (who you’ll hear from later) in the National Semifinal, but they were the only team to defeat the Terriers multiple times that season.

Give me UVM here.

Merrimack was pretty good during the 2010-11 season. The Warriors made it to their first ever Hockey East championship game, where they’d lose to BC. At 25-10-4, they earned their first ever Division 1 NCAA Tournament berth. 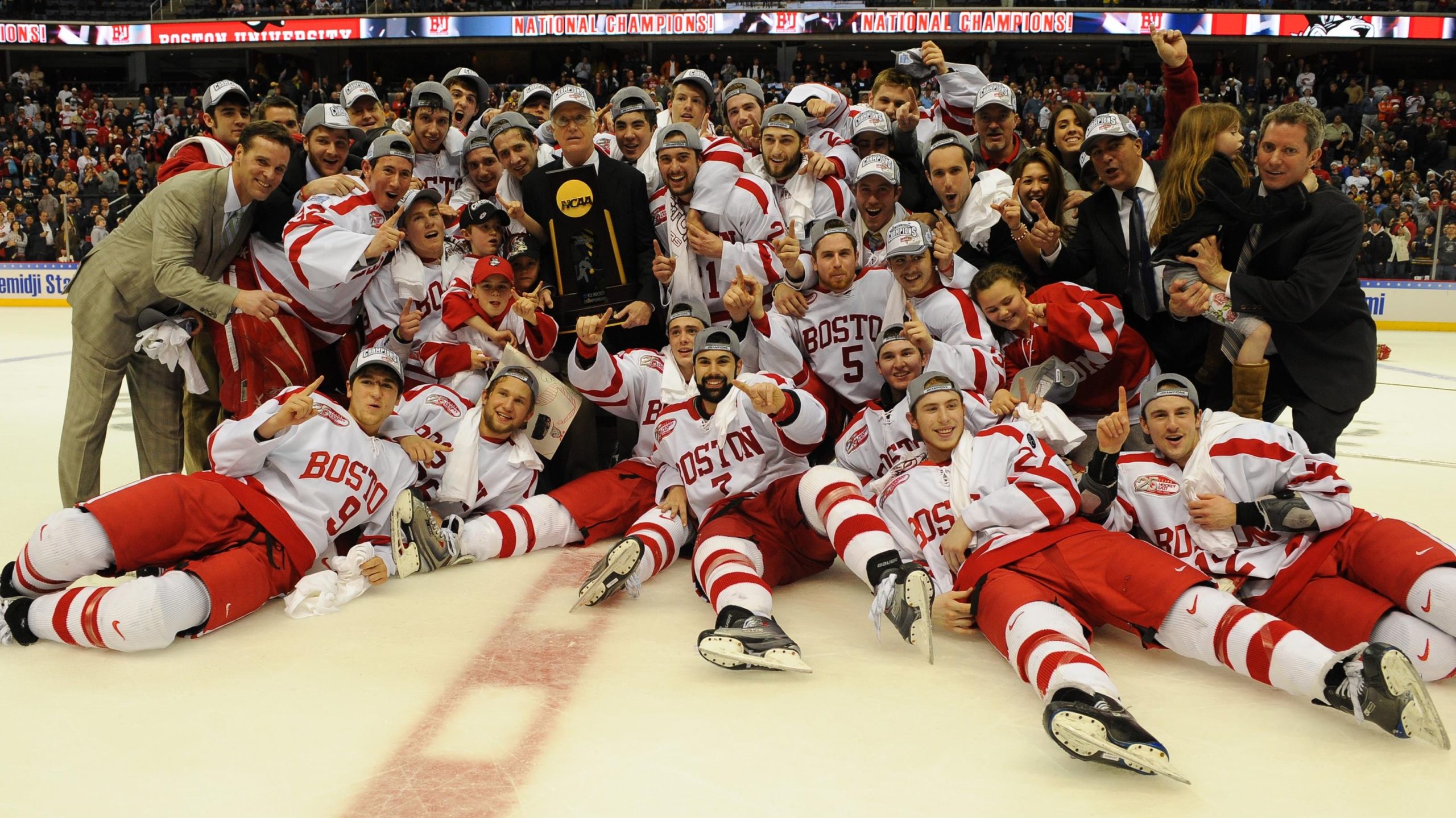 But the 2008-09 BU team was elite. They scored 177 goals, 22 more than any other team in the nation. Three Terriers finished in the top 10 in points and still another, Matt Gilroy, brought home the Hobey Baker award for BU. They won the Ice Breaker Tournament, the Denver Cup, the Beanpot, the Hockey East Championship and the National Championship. They won 35 games that year.

Yeah BU takes this one.

Notre Dame was only in Hockey East for four seasons, and it wasn’t exactly a positive venture for either side. The Irish never finished higher than third in the conference and were already looking to leave within months of joining the conference. Their best season in the conference was their last when they made it to the Frozen Four. It wasn’t even that great of a season, but the Irish got hot one weekend in March.

Their opponent UNH led the nation with 31 wins in the 1998-99 season and came within a goal of winning both the Hockey East and National Championships. Senior Jason Krog won the Hobey Baker award with an 85-point season for a team that finished second in the nation in scoring.

I was going to pick Notre Dame’s opponent regardless of who that was just out of principle. The Irish weren’t a real Hockey East team. They’re only in this tournament to balance out the numbers. But, in this case, I genuinely do think UNH is the better team.

Our first matchup of National Champions. These two are actually getting quite familiar with drawing each other in the quarterfinals. They went to the wire in a three-game set in 2019 and were on track to face each other in 2020 before the Hockey East Tournament was cancelled.

This matchup is a case of not all National Champions being equal. I was torn between the 2012 National Champions and the team from a decade earlier for BC, but I settled on the former. The 2011-12 Eagles were loaded: Chris Kreider, Johnny Gaudreau, Brian Dumoulin and Kevin Hayes. In net, Parker Milner had one of the best single seasons in BC history, posting a 29-5-0 record with a 1.66 goals against average. The Eagles were also a stellar 11-1-0 in neutral site games.

Providence was good, BC was great.

If these two teams played, Maine might score ten goals. The Black Bears went 42-1-2 in 1992. They scored at least two goals in each game and finished with 272 total. Both of their ties were 4-4, and their lone loss was a 7-6 overtime game against BU. Freshman Paul Kariya won the Hobey Baker award with a 100-point season. Jim Montgomery had 95 points, and 5-foot-4-inch Cal Ingraham led the nation with 46 goals. Garth Snow and Mike Dunham each won more than 20 games in net. Easy win for Maine.

The River Hawks have been one of the best Hockey East teams since Norm Bazin took over in 2011. Two years after inheriting a 5-24-5 team, Bazin had UML in the Frozen Four. The 2012-13 team went 28-11-2, won the Hockey East Tournament for the first time in program history and earned the No. 3 overall seed in the NCAA Tournament. Freshman Connor Hellebuyck was a driving force behind the team’s success, posting a .952 save percentage and 1.37 goals against average.

However, the River Hawks weren’t that great of an offensive team, so I’d lean towards the more complete team in BU.

This was the toughest matchup to call. Both teams won exactly 31 games, had a Hobey Baker winner and advanced to the National Championship game. It’s tough to compare exact numbers, as the number of goals scored per game was were much higher in 1998. For example, Alex Limoges of Penn State led the nation with 50 points in 2018. He wouldn’t have cracked the top 15 back in 1998. I’ll give the slight edge to UNH, because they were a better pure college team, having no future NHLers on the roster. But this game truly is a coin flip.

I’d love to put BC through to the finals, but they just ended up in the wrong half of the bracket. Had they faced any team other than Maine, they’d probably have advanced to the finals. However, the 1992-93 Maine team was an absolute wagon, bulldozing every team in their path.

UNH was one of the best teams in the 1998-99 season. BU was the best in 2008-09. Arguably the most talented team Jack Parker coached, which is saying something, the Terriers led the nation in goals, scoring 29 more than any other team. They were elite in non-conference games, defeating Michigan, Denver and North Dakota, among others. In a historic season for the program, they were ranked No. 1 most of the season. BU moves on to the finals. 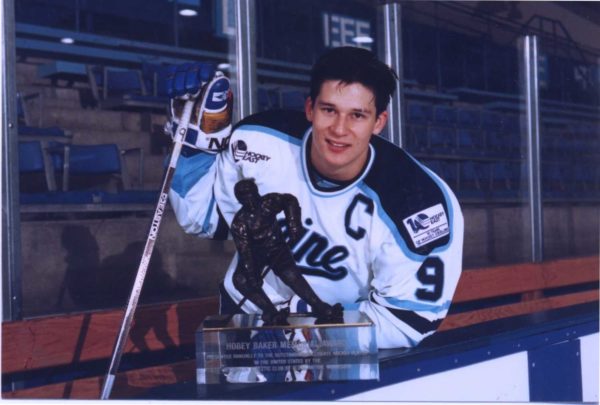 You may have guessed the winner from the way I described the BC-Maine matchup; the Black Bears
are going to win. For what it’s worth, I think the 1992-93 Maine team is the best in college hockey history. They were 22-1-1 in conference and 42-1-2 overall. On any given night, their backup was probably better than the other team’s starter. One weekend, they outscored Merrimack 25-3 during a two-game stretch. They won Hockey East by eight points and were up 21 on the third place team in the conference. They won 30 games before they lost one. Yeah, they were elite.

So there you have it: the 1992-93 Maine Black Bears are the best team in college hockey history. if you are interested in learning more about this dominant Black Bears team, check out the season documentary “Out of the Woods” on YouTube.