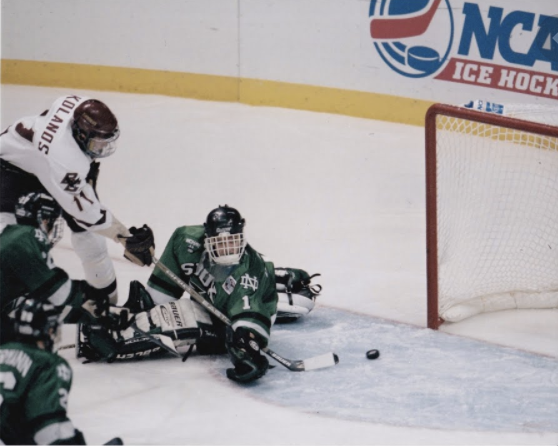 You couldn’t have scripted it any better. David Cotton, Boston College’s senior captain who had had his season end in heartbreak one too many times, jammed home a rebound in double overtime to win a National Championship for the Eagles.

Or at least the simulated version of Cotton did.

In lieu of the cancelled NCAA Tournament, College Hockey News ran a very in-depth simulation of it. And Saturday night, the night when two teams were scheduled meet in Detroit with a trophy on the line, it was time for the simulated national championship.

To reach the finals, BC won the Albany Regional, defeating both Ohio State and Cornell 4-3. In the Frozen Four, the Eagles downed No. 1 overall seed North Dakota to reach the title game.

BC salutes the fans after winning the 2008 National Title.

On the other side, the Denver Pioneers. As a de facto home team in the Loveland Regional, Denver downed Bemidji State, Arizona State and Minnesota State en route to the finals.

Denver defeated BC twice early in the regular season in Colorado. At the time, the undefeated No. 1 Pioneers won 3-0 and 6-4 on back-to-back nights. The Eagles hung tight in both games, showing early signs that they could compete with the best teams in the nation.

A record crowd saw BC win the 2010 National Championship.

lead. In the second, Logan Hutsko and Mike Hardman gave BC a 2-1 lead, before Liam Finlay tied it back up late in the period.

That was it for the scoring, until Cotton’s double-OT winner. Nobody deserved that moment more than Cotton. He never got the chance to do so in reality, so it’s quite remarkable that the computer simulation wrote such an apt storybook ending. Although the computer wasn’t without its limitations; Chris Grando assisted on the first BC goal of the night, and he transferred to Arizona State prior to the season.

The banner will never hang in Conte Forum, but it’s fun to wonder what could’ve been…