Anthony Brown Offers BC Football a Glimmer of Hope

This weekend, football programs from most of college football’s top conferences will square off in conference championship games. Riding on the outcomes are coveted College Football Playoff berths, spots in the New Years Six bowl games, and bowl eligibility. As Christmas nears, the chaos that is bowl season will commence, as 80 teams will take advantage of the extra practice time and game to reward their 6-6 (or, this year, even 5-7) or better record.

Boston College will not be one of those teams in 2015. Coming off a 3-9 season in which quarterback injuries and underachievement plagued the Eagles, BC heads into its longest offseason under Coach Steve Addazio searching for answers. One of them just may come in the form of incoming freshman quarterback Anthony Brown. A standout at St. John Vianney Regional High School in Holmdel, New Jersey, Brown has announced that he will enroll early at BC to participate in spring practice. Due to the Eagles’ quarterback carousel, he figures to have a real chance to compete for the starting job. Coach Addazio does not love to throw true freshmen into the fire, especially at a premium position like quarterback, but after being forced to break in Jeff Smith and John Fadule as true rookies this year, Brown has a chance to crack the lineup. 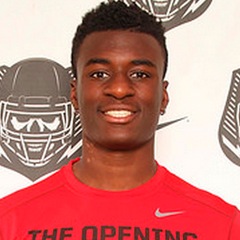 If BC is going to have a much-improved 2016 season, it is obvious that a reinvigorated offense is going to have to be the catalyst. The defense returns several starters and those graduating can be replaced with depth in the forms of Connor Strachan, Matt Milano, and Kevin Kavalec, among others. Don Brown’s defensive unit needs a competent quarterback to step forward and chip in on the other side of the ball. Anthony Brown just may be the guy the Eagles desperately need. Listed at 6’1″ and 195 lbs., Brown is a dual-threat 3-star QB recruit ranked as the 49th best at his position for the collegiate class of 2020. After receiving 14 scholarship offers, most notably from Syracuse and Northwestern, Brown committed to the Eagles on May 22. He fits the system Addazio and offensive coordinator Todd Fitch want to run– the spread offense.

With a 4.7 40-yard dash time that should only improve and strikingly impressive passing numbers, Brown is well-rounded. Scouts love his arm strength, his calm demeanor when plays break down, and his high release point, utilizing his size. His playing style most resembles Darius Wade among BC’s current quarterbacks, as Smith and Troy Flutie are smaller and Fadule is far less polished. Averaging nearly 20 yards per completion, as Brown did in high school, is an unsustainable figure in the ACC, but even 10 yards per completion would be a welcome improvement for BC. His yards per carry average of 9 certainly looks nice, too. Additionally, Brown’s leadership should not be overlooked. St. John Vianney underwent a coaching change before his senior year, but Brown still led the Lancers to an undefeated regular season. Scouts say he slowed his game down and played more in-control to allow the team to adapt to the new system and staff. 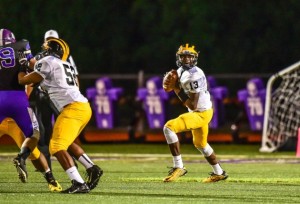 Asking Brown to win the BC quarterback job in spring practice is probably an unreasonable request. Though his raw talent and intangibles are exciting, he likely will need time to develop. The best-case scenario for BC is that Brown is able to take valuable reps in the spring behind a healthy Darius Wade while growing accustomed to college life and football. If the incoming freshman is as good as advertised, it could spell trouble for the likes of Flutie and Fadule. Regardless, it is nice to go into the long, harsh winter knowing there may be a light at the end of the tunnel at quarterback for the Eagles.