Weekend Recap and What’s Ahead

Coming off a packed weekend in Boston College Athletics, let’s take a look at what went right, what went wrong, and what’s coming up this week for our Eagles.

34-0-0. The unstoppable force known as Boston College Women’s Hockey finished off its unbeaten, untied regular season in style, sweeping the Providence Friars in a home-and-home set. A 7-1 Friday win on BC’s Senior Night turned into a 9-1 road rout on Saturday. BC is the first team ever to go unbeaten and untied in Hockey East history, and is just the second team ever to enter postseason play with an unblemished record, following Minnesota in 2012-13. Said head coach Katie Crowley of the perfect regular season, “It’s an amazing feeling. This team has worked so hard this year. They’ve done everything the coaches have asked them to do. They deserve it. They’ve worked so hard, competed hard every day when we’ve asked them to. I’m just really proud of the way my team played all year long.” Pure dominance, and an impeccable sendoff for seniors Dana Trivigno, Meghan Grieves, Kaliya Johnson, Alex Carpenter, Lexi Bender, and Haley Skarupa.

Speaking of dominance, what a weekend by “Birdball.” The Eagles Baseball club opened its 2016 campaign in Glendale, Arizona, with a resounding four-game sweep of the Northern Illinois Huskies. BC saved its most impressive performance for last, a 17-0 drubbing of the Huskies on Sunday afternoon, pushing the weekend aggregate to 29-2. The Eagles’ four starting pitchers, Mike King (pictured above), Jesse Adams, Jacob Stevens, and Thomas Lane, did not yield a single earned run to the Huskies. Other weekend highlights included a 3-run home run by freshman Gian Martellini in his first collegiate game in Friday’s 5-1 win and an excellent Sunday for senior Logan Hoggarth, whose first career home run was a grand slam in the blowout. Hoggarth also added a fifth RBI and extended his hitting streak to 11 games, a career-long.

Sticking with the theme of sweeps, Men’s Hockey took the brooms out this weekend as well, winning both games against the Vermont Catamounts up in Burlington, VT. The two key road wins vaulted the Eagles back into first place in Hockey East (jumping Notre Dame). The Eagles are now a mere two points away from clinching the top seed in the Hockey East Tournament, which they can nab without help by either winning one of two matchups with UMass-Lowell this weekend, or by forcing a draw in both games. Austin Cangelosi extended his scoring streak to four games over the weekend, while Thatcher Demko upped his record to 22-4-4. Still unbeaten in 2016, BC is playing its best hockey at just the right time. 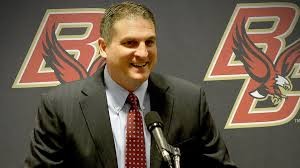 Coach Jim Christian has not been all smiles of late. The Eagles are 0-14 in ACC play, but can end the skid Tuesday night against Virginia Tech.

Only one thing kept this weekend from being an outstanding one in Boston College Athletics. Men’s Basketball suffered its worst defeat of the season on Sunday night, a 74-48 loss on the road to the Wake Forest Demon Deacons. Making the loss even more disappointing, Wake Forest entered the game 1-13 in ACC play and played without its leading scorer and the ACC’s No. 3 rebounder, Devin Thomas (15.8 PPG, 10.2 RPG). Coach Jim Christian elected to bring Eli Carter off the bench after he struggled through a 1-for-17 shooting effort at Clemson on Wednesday. It’s safe to say the move backfired, as BC fell behind 37-4 within 16 minutes of action (though there were many, many more reasons than just Carter’s temporary benching). Added Christian on the loss, “For whatever reason, we just didn’t come to play. I’m embarrassed, because we can play much better than that. The last two games (Syracuse and Clemson) are probably the best two games we’ve played all year, but tonight we were awful in all facets.”

Men’s Basketball has a chance to get in the win column on Tuesday night when they host Virginia Tech. Women’s Hockey awaits a 3-game playoff series with Maine this weekend to begin conference tournament play. Men’s Hockey will battle the UMass-Lowell RiverHawks in a home-and-home to finish off the regular season. Baseball will participate in the Snowbird Classic down in Port Charlotte, Florida, next weekend. Birdball will face Chicago State, Indiana State, and Villanova, before it has its annual spring training date with the Boston Red Sox on February 29.