Puck drop is only a few short months away, and there’s a lot to be excited about Boston College hockey. But while the anticipation builds, let’s take a look at some of the best uniforms in college hockey. Where does BC rank? Do any Hockey East foes crack the top 10? Will any D1 teams you’ve never heard of be on this list? All those questions and more will be answered below. 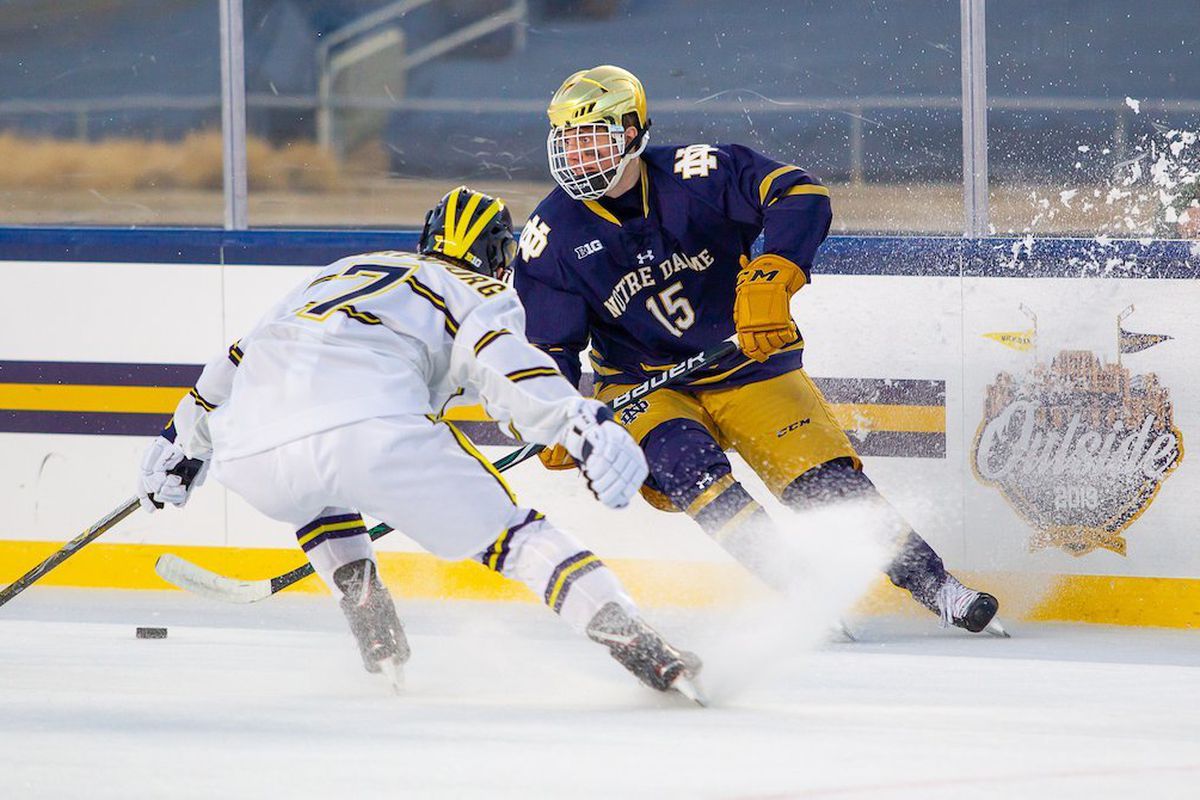 My list started with 19 teams before I narrowed it down to 12. Michigan and Notre Dame were the last two cuts, because I realized that each school’s distinctive helmet design was really the only reason the whole uniform set is considered special. Michigan’s football style helmets and Notre Dame’s iconic gold domes are great and all, but the rest of the uniform isn’t anything to write home about (although the above uniforms from their outdoor game in 2019 are pretty sweet). The Nanooks home and road uniforms aren’t particularly special, but they land on the list because their third sweaters are phenomenal, one of the best individual uniforms in college hockey. The home and road sweaters are fairly plain, sticking to the blue, yellow, and white color scheme, with the home having a large font “A” and a polar bear, and the road having “Alaska” scrawled across the front. But those alternates. I love, love, love the alternating blue and yellow striping on the sleeves. Also, “Fairbanks”, while a little long to be written on the front of a uniform, works remarkably well here, with an enlarged polar bear to contrast the lettering. The polar bear is really the only white in the uniforms, so it definitely provides an explosion of color. 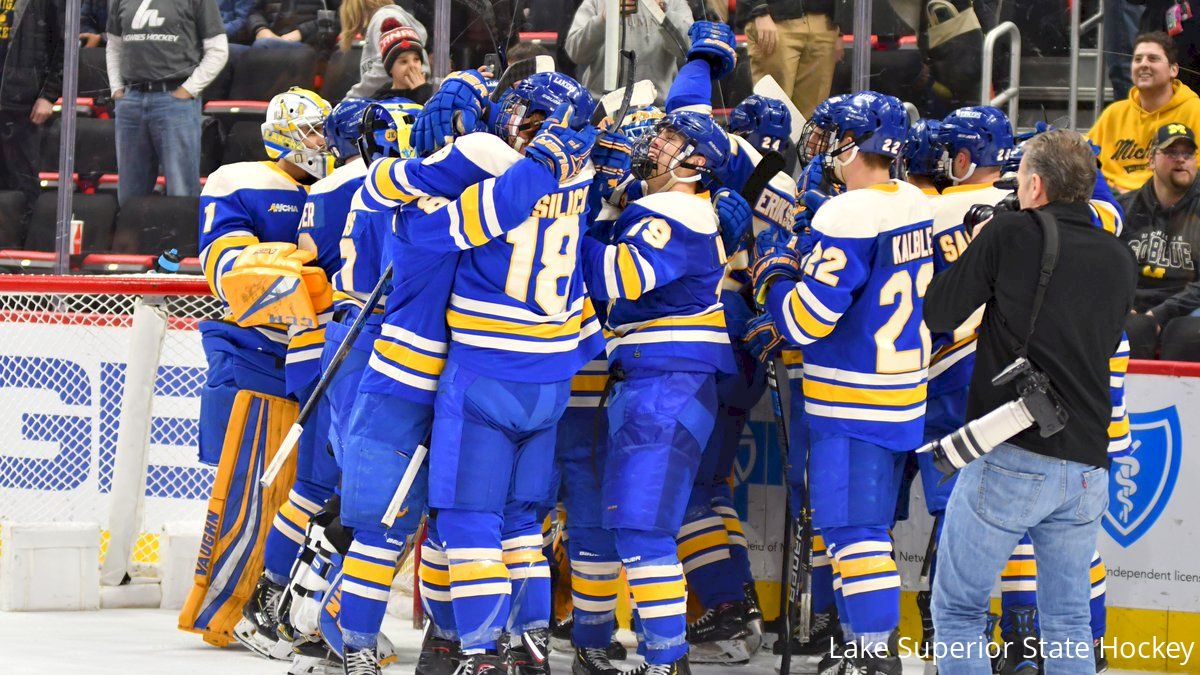 The logo isn’t great. In fact, it’s pretty bad. The anchor is quality, but the ascending “Lakers” is in a boring font. It’s also weird that the lettering is backed by white, almost like the word is sewn on top of the uniforms. But the color scheme is great, almost like the old-school St. Louis Blues uniform, but with a slightly darker shade of blue. And the incorporate cream. Every team should look into cream; it’s a refreshing change of pace from white. Ferris State was a team I could’ve gone either way with, but the Bulldogs end up on this list, like Fairbanks, primarily for their third uniform. A lot of people like the distinctive bulldog logo, but it’s a little too cartoonish for me. Nevertheless, the design does make the uniform distinct from other teams of the same name, and trust me there are a lot of “Bulldogs” in collegiate hockey. The third sweaters are just majestic, but I don’t think I’d like them if I didn’t go to BC. They remind me a lot of retro BC uniforms, and I like retro BC uniforms, so bonus points for the bulldogs. For as much as bright yellow can be an ugly look, it does bring with it a sense of nostalgia, giving Ferris State’s thirds a 1980s look which is very welcome. I’m a sucker for script font too. If I were Ferris State, I’d make the alternates the permanent road uniforms. Although the uniform isn’t all that unique by hockey standards (see: Montreal Canadiens), the St. Cloud logo is completely unique among college hockey sweaters. To a degree, it has only become a recognizable uniform, because the Huskies have been so good over the past few years. The home whites are just ok; the road blacks are much better. The blacks have an outline of the state of Minnesota on the shoulders, which reminds me of the MLB’s Twins secondary logo, one that I like. The two-tone shoulder piping is another nice touch. Again, the third uniforms really put St. Cloud over the top. I love the red sweater with black pants. And the script font pairs perfectly, allowing the “ST” inside the Canadiens “C” to serve a secondary role on the shoulders, helmets, and pants.

Of course I think BC has the best uniforms in college hockey, but I have to keep it objective (even though this whole list is basically subjective). The Eagles uniforms haven’t deviated much over the years, but they don’t have the same tried and true classic look of a school like BU. The gold uniforms are my favorites and my preferred choice of a BC hockey sweater to own. However, I really don’t like the Eagle on the alternates; the ones that said “Boston College” or even “Eagles” looked a whole lot better. I also like the five thin stripes look on the alternates. They make the gold uniform stand out even more from the traditional home and away unis. Speaking of sleeve piping, I recently discovered, credit to Mark Majewski, that the patter between the stripes on the midsection and arms on the home and road uniforms is supposed to mimic the stained glass of Gasson Hall. A nice touch that is sure to resonate with many BC fans. But, back to what I said originally, BC loses points, because it doesn’t feel like these are BC’s uniforms and it sure doesn’t feel like they are going to be BC’s uniforms. We’ve seen a push to return to the old logo and retro maroon and yellow uniforms in basketball and hockey. The move to the old school look has been warmly received, so it wouldn’t be a surprise if the BC hockey uniforms undergo a rebrand in the coming years. 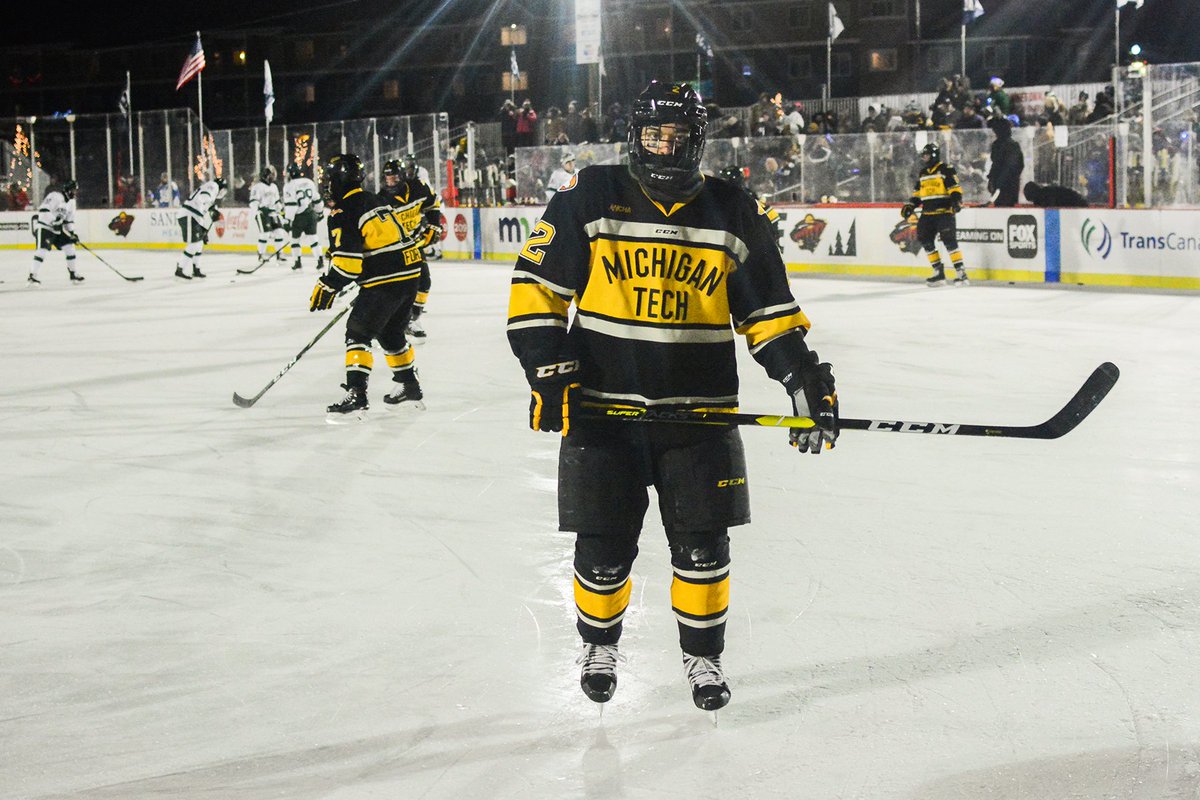 Mark Majewski, the same person who detailed the meaning behind BC’s shoulder piping, ranked these uniforms as the best in all of college hockey, so of course I had to give them a look. The home and road sweaters look and feel like the Bruins uniforms, so yeah I’m partial to that. But what I really love is the lack of white in both of the alternates. One is yellow, the other eggshell. Both have the script “Huskies” on the front, underlined with a number left skewed below. Give me a cream colored uniform, or a cream accented one, and, to quote the great Ric Flair, you’re “stylin’ and profilin’” on the ice any day of the week in my book. Where the Huskies lose points is on the home and road unis, which recently underwent a redesign to include a crest instead of letter on the front. The classics (pictured above) were much better.

I love Duluth’s bulldog logo, like a lot more than Ferris State’s bulldog. The uniforms are simple and clean. Nothing too flashy. The overloading of maroon on the roads is nice touch. The lack of another color on the shoulders and collar really makes the yellow laces pop. The throwback alternates have a diagonal “Bulldogs” across the front, a design I don’t particularly care for. Nevertheless the uniforms are sleek and look top notch out on the ice. They also have a different shoulder patch on every uniform, something you don’t see really anywhere. They also have another throwback alternate yellow uniform which is tough to describe. It has some cool mid-chest vertical striping and is very collegiate-looking. As an aside, I learned from this little project that the college hockey landscape is littered with Bulldogs and Huskies. I know I’m going to get destroyed for picking BU over BC on this list, but when you’ve looking for a classic, easily-identifiable jersey, look no further than the Terriers. The red and white combo is beautiful and unlike any other in college hockey. The font is simple, with either “Boston” or “Boston University” scrawled across the front. The chest and shoulders match in color and are separated by a simple shoulder stripe, a simple but unique touch. The all-red roads are nice but I really like the contrast between the white sweater and red pants on the homes. As a bonus, their old Frozen Fenway uniforms were a thing of beauty. The Red Sox font and and skate shoulder emblem appeal to my inner Bostonian. If BU wasn’t BU, I’d own one of those unis. From the time honored Terrier jerseys, we’re going to switch gears and go with probably the newest uniforms in the game. Fresh off their first NCAA Tournament appearance (in only their fourth D1 season), the Sun Devils boast some of the freshest uniforms in the nation. There are a lot of colors and a lot of uniform combinations; somewhere I heard someone call them the Oregon of college hockey, and that’s pretty spot on. According to a team publication on December 11, ASU has three jerseys, five helmets, three gloves, and three pants, for a total of 135 uniform combos. Adidas makes their uniforms, meaning they get to wear the Adizero style like the pros. All five helmets have a logo on them, a cool feature. But the uniforms pop a lot more than other helmet-design teams, like Michigan and Ohio State. Both the road reds and alternate blacks have no white at all, something that I’ve mentioned I’m a particularly big fan of. One last thing, they implement a dark grey on their pants and road uniforms. Dark grey has become a thing lately (looking at you Diamondbacks). But unlike the Arizona baseball team, the Arizona college hockey team does it right. We’ve finally arrived at No. 1 and, well, it just had to be Maine. I came up with the idea for this list primarily because I love Maine’s uniforms so much. The two-tone blue, especially the powder blue is gorgeous. I know I’ve ragged on white, but I wouldn’t want cream or grey or anything else to complement the shades of blue. The home and roads use script, with the “e” in “Maine” continuing to an underline of the word. The alternates use the school’s three flag logo instead of the athletics Black Bear logo, which gives this uniform a collegiate look. Well done Maine, well done. Now just start winning again, because these uniforms deserve to be on TV more often.