Light the Lamp is back after a brief hiatus last week. Turkey may have gotten the best of me, but it surely didn’t hold back the Boston College Eagles. Let’s do this.

Who knew Bruno Mars was such an avid Boston College hockey fan? He hit the nail on the head in “Uptown Funk,” because the Eagles are certainly hot (not too hot, though, because there’s no such thing in sports). Off to an impressive 12-1-0 start, the nation’s second highest scoring team has seen nothing but success the first two months of the season. Since the thrilling 6-4 victory over Michigan State on Nov. 13, Boston College has outscored opponents 17-6 while getting three more wins under its belt. The competition in those three games was not stellar, but those games were must-win for the soaring Eagles. Two of the three coming on the road against Hockey East foes UNH and UConn, the Eagles sent R.I.T. home on Saturday with little to be thankful for, scoring six unanswered goals en route to a 6-2 win.

Boy, do they grow up quickly. Freshmen Colin White and Miles Wood have been nothing short of phenomenal in their first thirteen games on the Heights. Never discount a player because of his age. These two first-year Eagles have tallied 21 and 17 points, respectively, and are only improving. On a roster heavy with juniors and freshmen, these two standouts will become (and already are) the core of a potent Boston College offense. Will they recreate the success left behind by the Kevin Hayes/Bill Arnold/Johnny Gaudreau just two years ago? At their current rate of scoring, White and Wood are certainly on track to. 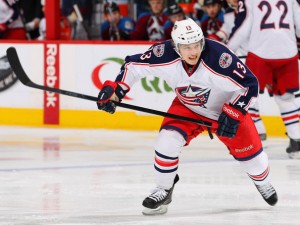 You Cam Do It

In continuation of last edition’s feature on former Eagle Johnny Gaudreau, this week we’ll take a look at another Boston College product flourishing at the professional level. Cam Atkinson, currently in his fifth season in the NHL with the Columbus Blue Jackets, was a three-year standout during his time in Chestnut Hill. Playing from 2008-2011, Atkinson was a part of the 2010 National Championship team and was a Hobey Baker Award finalist in his junior year campaign. The small, but skilled, right-winger has seen increased playing time since Columbus’ hiring of head coach John Tortorella, and he is only getting better. Currently sitting with 15 points (6-9-15) in twenty fives games this season, Atkinson displays versatility in being able to play up and down lines with different linemates every night. Having departed Boston College just one year shy of graduation, he has expressed his desire to come back to Boston College some day to complete his degree.

Boston College heads into this weekend with a home-and-home series against the Northeastern Huskies, who are currently in dead last in Hockey East with a record of 2-11-2 (0-7-2 HEA). Despite the Huskies’ abysmal start, the Eagles’ devastating 3-2 loss in the 2015 Beanpot semifinal against Northeastern is fresh on both teams’ minds, and will be on display during the games. Look for the Huskies to come out hungry, hoping to shift the momentum in a recent history that has strongly favored Boston College. Saturday night’s puck drop at Conte Forum is set for 7pm, and you can tune in to WZBC 90.3 FM or stream online here as Conor Hawley, Anthony Iati, and I will be on the call.

Until next time, eat your vegetables and go Eagles!