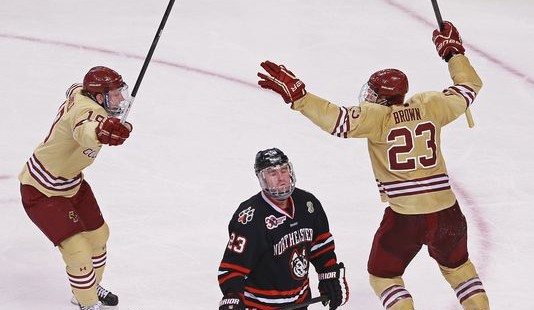 It took every minute of the deciding game, but Boston College survived a major scare from the Vermont Catamounts in the Quarterfinal round of the 2016 Hockey East Tournament and advanced with a 4-3 overtime win in Game 3. The Eagles, the top seed in the conference tournament, are set up for a date with the crosstown rival Northeastern Huskies in a 2016 Beanpot matchup that wasn’t– NU is the team BC missed out on facing in February. BC will get another crack at Northeastern on Friday night at 8:00 pm in TD Garden. WZBC Sports will bring you coverage starting with Casey Hague in the WZBC Newton 90.3 FM studios at 7:45 PM and Scott Geyman, Anthony Iati, and Quinn Kelly downtown to call all the action.

Northeastern enters the Garden on Friday with the longest odds of the final four remaining teams, but only because of seeding. As the No. 6 team, the Huskies will have to outlast the No. 1 Eagles and either the No. 2 Providence Friars or No. 4 UMass-Lowell RiverHawks in order to capture the conference crown. They are also the only remaining team that had to play in the “Octofinals” during the first weekend of March, emerging with back-to-back overtime home victories over Maine and advancing to face No. 3 Notre Dame in the Quarterfinals. The Huskies rolled into South Bend and came away with a convincing sweep of the favored Irish (ranked No. 10 nationally), winning 3-1 on Friday and 6-4 on Saturday.

The previous meetings between BC and Northeastern this year served as something of a turning point for each team. The Huskies entered Conte Forum on December 5 to find an Eagles team on an 11-game winning streak. The visitors were off to a dreadful start: 2-11-2. A sluggish BC effort on that Friday night enabled Northeastern to scratch out a 3-3 tie, ending BC’s winning streak and slowing the Huskies’ bleeding. The next day at Matthews Arena, the Huskies jumped all over BC, racing out to leads of 2-0 and 3-1. BC used 3rd period goals from Josh Couturier, Alex Tuch, and Matthew Gaudreau to claw out a 4-3 win at the Dog Pound, but Coach Jerry York could not have come out of that weekend pleased with the way BC played.

Despite only earning 1 of a possible 4 points, Northeastern used the BC series as a springboard; the Huskies are 18-1-2 since then, including, ironically, an 11-game winning streak of their own. The sloppy weekend against Northeastern drastically cooled off the Eagles, as it began their December swoon. The Eagles subsequently blew a late lead to Notre Dame at home on Dec. 10 and came in last in their holiday tournament in Florida, falling to Ohio State and Providence in Estero, FL.

Realistically, Friday night’s Hockey East semifinal means more to Northeastern than it does to BC. The Eagles are a lock to get at least an at-large bid to the NCAA Tournament regardless of what happens on Friday. As for the Huskies, a loss to BC would leave them on the bubble. Northeastern needs at least a win in the semifinals to improve its chances, and winning the conference title on Saturday would get NU an automatic bid. Make no mistake, York, Thatcher Demko, and the rest of the Eagles should be hungry for a victory, but Northeastern truly has a season on the line.

Below, see the game picks of our WZBC Sports broadcasters and don’t forget to tune in to WZBC Newton 90.3 FM or via the FM stream on wzbcsports.com on Friday night at 7:45.