David Cotton is Back, and He’s Ready to Write a New Ending

Oliver Wahlstrom’s wrister ricocheted off of Cayden Primeau’s blocker as the seconds ticked off the TD Garden scoreboard. Moments later, the Northeastern Huskies were celebrating as 2019 Hockey East champions.

The loss would’ve been easier to swallow had Boston College not come so close to knocking off the Huskies. After finishing the regular season in seventh place in Hockey East, the Eagles pulled off a first round upset over Providence in the conference tournament. In the semifinals, BC outplayed eventual national runner-up UMass for a full 60 minutes. That set the Eagles up for a date with Northeastern with a trip to the NCAA Tournament on the line, but the 3-2 loss in the championship game sent BC home heartbroken after a short, but magical run.

It also would’ve been easier had it not been BC’s third-consecutive season-ending heartbreak. Three seasons ago, the Eagles faced a similar Hockey East final deficit, this time against UMass Lowell. The Eagles trailed by two late but nearly forced overtime with a goal and a slap-shot that hit off the post The following year, it was Boston University’s turn to crush the Eagles tournament hopes. Patrick Curry broke a 3-3 tie late in the first overtime, despite BC doubling up BU in shots in overtime. And then there was Northeastern last March.

Senior David Cotton was on the ice for all three of those losses. He felt the pain of each one firsthand, and that’s why he’s back on the Heights for his senior season.

For Cotton, the goal is simple: make sure things end differently than they have the last three years. Part of that comes down to starting the season out on the right foot.

“In the past couple years, those first 5-10 game of the year have really come back to bite us in the end,” Cotton said. “So we have to take [the season opener] as if we’re fighting for a national tournament bid.”

Last season, BC started 0-5-0, which included a two game sweep in Madison against Wisconsin, who BC hosts to start the season. The season prior, wasn’t any better; the Eagles went 1-5-1 in their first seven.

The 2019-20 season provides its usual dose of high-end opponents to start the season. After hosting the Badgers, currently No. 16, to open the season, the Eagles will travel to No. 2 Denver for two games and welcome No. 6 Providence to the Heights.

Cotton has some help in his quest to get BC to the NCAA Tournament; Logan Hutsko and Julius Mattila, Cotton’s primary line-mates from a season ago, both return to BC.

The three were put together following BC’s November 2nd loss to Merrimack, which dropped the Eagles to 0-5-0. In the five losses to start the season, Cotton had one hat trick but went without a point in the other four games. Once he was paired with Mattila and Hutsko, things started clicking for him. Here’s how he started out with his new line-mates:

The top line of Cotton-Mattila-Hutsko is officially on 🔥 … 3 more goals, 6 more points, and a 3-game BC winning streak!

“We really complement each other perfectly,” Cotton said. “And over time it just builds the chemistry. We know where each other is going to be.”

Cotton recorded 21 of his team-leading 36 points when he played with Hutsko and Mattila. The three were listed together for 20 games last season, and Cotton found his way onto the score sheet in 13 of those games. Injuries to both of Cotton’s line-mates, as well as line shuffling to generate depth scoring, prevented the line from playing together for the final month and a half of the season, but they reunited just before the Hockey East tournament, fueling BC’s run. Led by Cotton’s 3 goals in 5 postseason games, the line scored or assisted on 9 of BC’s 15 tournament goals.

The top line of veterans will be supplemented by a talented group of freshmen, led by three who were selected in the first round of the 2019 NHL Entry Draft.

“This is a special team we have right now,” Cotton said. “There’s a completely different feel in the locker room than there’s been in years past.” 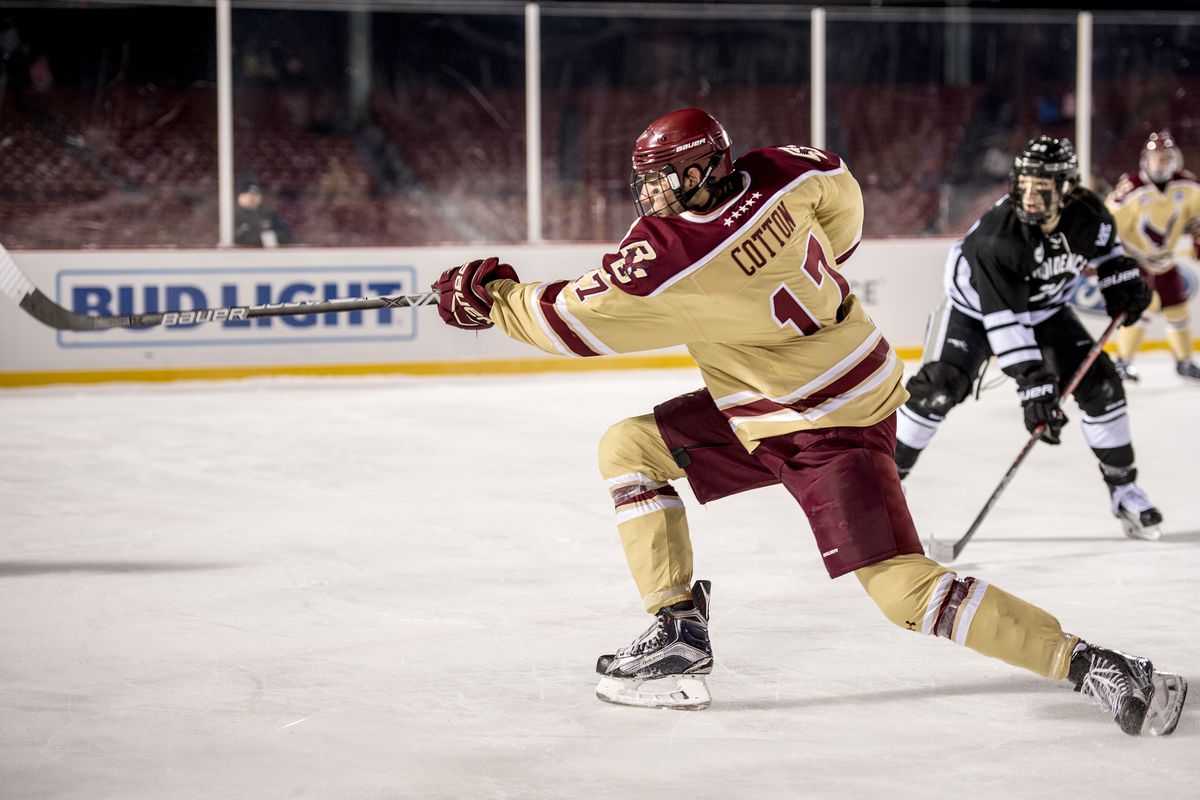 Cotton will lead the mix of youth and veterans into a season wearing the captain’s “C” on his chest, replacing the trio of Christopher Brown, Casey Fitzgerald and Michael Kim who captained the team for the previous two seasons. The importance of the position isn’t lost on Cotton.

“You look back at the names that were able to wear the ‘C’ and lead this team and theres a lot of special people on that list,” Cotton said. “Being able to associate myself with those guys is a huge honor for me.”

Cotton is very much a lead-by-example guy. That came through in spades last season. He was the one directing traffic on offense, guiding the younger players through the transition to the collegiate level. And when BC needed a spark, he was always there to provide it.

He started the comeback against Northeastern in the Beanpot final, scored the opening goal in BC’s upset over UMass during the Hockey East Semifinals and contributed to both goals when BC trailed 3-0 in the Hockey East finals. Cotton may excel in big moments, but for him, nothing changes from the Beanpot to a mid-November game against any old Hockey East team.

“I come to the rink and try to prepare the same way,” Cotton said. “I try to treat every game the same. they’re all important. For me it’s just being consistent with my routines. I think that’s been the biggest key for me.”

When the BC starting lineup is announced at the start of every game, the players’ home towns are also mentioned. More often than not, fans will hear “Massachusetts” or “Canada” or some other hockey hotbed as the players skate up to the blue line. Not for Cotton, though. He hails from Parker, Texas, where the weather rarely drops below freezing, not exactly ideal conditions for a young boy to cultivate a love for hockey.

But Cotton was, to a degree, in the right place at the right time. He was two-years old when the Dallas Stars won the 1999 Stanley Cup. While he was too young to remember their run to the Cup, his older brother’s took a liking to the game, along with the rest of the Dallas-metro area. By the time Cotton was old enough to lace up skates, he had the fever too.

He played youth hockey in Texas, before splitting time between Colorado, Massachusetts and Iowa during his high school years. Cotton credits his sophomore year at Cushing Academy in Ashburnham, MA for exposing him to the northeast college hockey culture.

After all the travel for junior hockey, Cotton was drawn to the proximity of opposing teams in Hockey East. Because Cotton wanted to stay local after Cushing, he certainly had his pick of top-tier schools in the Boston area. BC’s string of National Championships in 2008, 2010 and 2012 was certainly on Cotton’s mind when it came time to decide on a school.

The beauty of the campus and focus on education, coupled with the prestige of the program, sealed the deal for Cotton.

Three years and zero NCAA Tournament appearances later, Cotton stares down the prospect of being part of Jerry York’s first recruiting class to never play in the postseason. If things had been different, if Scott Savage’s slap shot had gone an inch lower in 2017, if Casey Fitzgerald had been able to lift Drew Melanson’s stick in 2018, if Wahlstrom’s shot had found its way through in 2019, then maybe Cotton would be in Carolina now, skating with the Hurricanes, who drafted him 169th overall in 2015.

But they didn’t. Savage’s shot clanked off the crossbar. Melanson snuck the puck under Joe Woll’s pads to tie the game. And Primeau denied Wahlstrom. Those moments were tough to live down, but they made Cotton’s decision to return easy.

“I wasn’t ready to leave on the terms I had already had,” Cotton said. “Not having the opportunity to lift any of the trophies that I’d come here to win, I wouldn’t be able to wake up and be satisfied with my decision if I had left.”

“I had a lot of unfinished business.”

“Individuals can’t win games by themselves”