It was a hot, sunny day in early September 2015. I was a brand-new freshman here at Boston College wandering around the activities fair having no idea what clubs I wanted to get involved with to help define my time here at BC. The only thing that I knew is that I loved sports and wanted to stay involved in some way. My playing career ended on high school graduation, however, a large reason that I decided to call BC home for four years was because it was an ACC school. So, I kept walking around the sea of undergrad students just wondering what sports related opportunities could present itself.

Al Preziosi and myself at Fenway – Spring 2017

After about ten to fifteen minutes I just hear “Come for the sports, stay for the friends” screamed from one of the hundred or so tables. As somebody who has loved sports for as long as I can remember, it was an easy way to draw me in. That phrase was shouted by Michael Graziano, who was one of the board members at WZBC Sports Radio. Once I was attracted to the table by Graz’s phrase I began to learn about the opportunities provided by the club – host a weekly talk show, broadcast BC sporting events and be part of a 2-hour long Sports Saturday talk show that was heard over a 50-mile radius of campus.

It sounded too good to be true. Ever since high school it was always joked around that I should have my own talk show “Monday’s with Maz” since I always kept up to date on the sports world and would talk sports with anybody, any time. As a dedicated fan of my (New York) teams from home, I expected to become a devout BC sports fan and this seemed like a great way to get closer to the teams and help with my adjustment from player to NARP (Non-athletic regular person).

I hopped on immediately with the talk shows, getting my various opinions out on air about Boston College, the New York Yankees, and everything in between. I was initially joined by Alex Ackerman. Among my first friends at BC, we bonded in Perspectives, and continued to enjoy three semesters of great radio. I added a semester with Austin Nardi who also ended up being the best roommate I had in college. Then finished out the talk shows junior year with Andrew Lynch. Lynch added great Boston based commentary to balance out my New York views and had a great rivalry based year of talk.

Going back to freshman year I hopped on a few other items first semester, Sports Saturday and College GameDay. 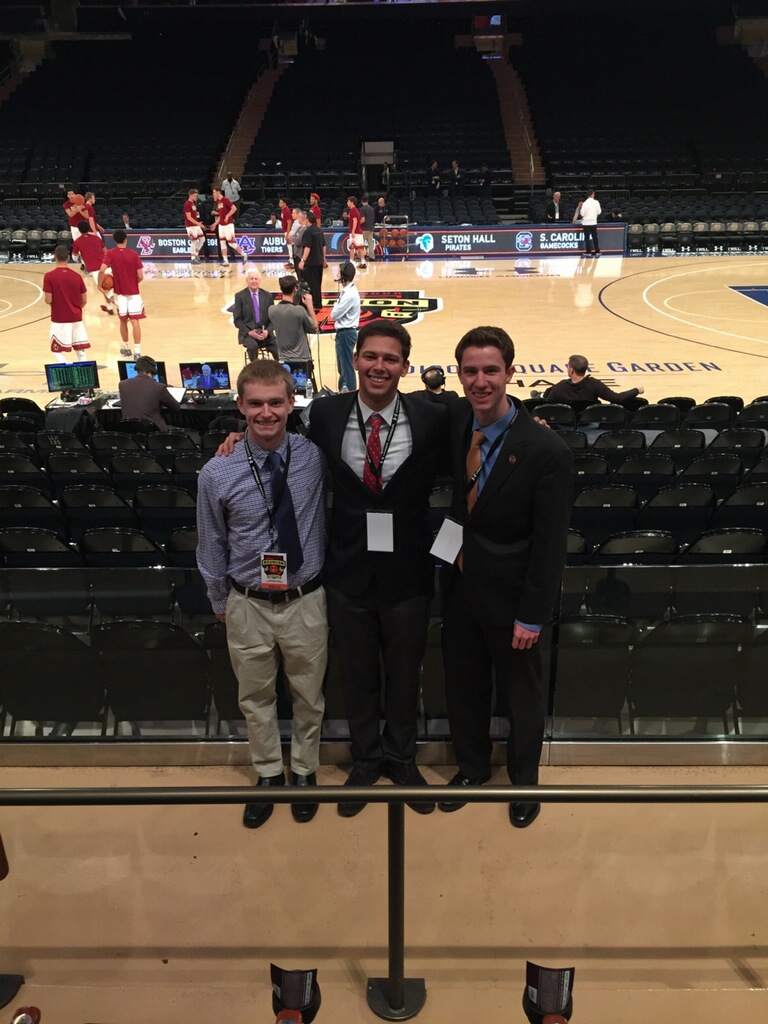 Ben Neuwirth, Steve McAlee and myself at MSG – Winter 2016

College GameDay was ran by Graziano that year and helping out involved waking up at 8 AM on football game day to help run a two hour talk show that was blasted on speakers to the tailgating public. I ended up running this show my sophomore year after joining the executive board. Sports Saturday was always enjoyable getting two hours of talk show, and knowing that there would be more listeners than just mom and dad as it was on the FM airwaves. Sports Saturday ended up being my responsibility Junior year, ensuring that every week we had two or three people to channel their inner Stephen A. Smith. Highlights include the 2017 Valentine’s Day Special where mini-golf was a hotly debated topic, as well as jumbotron proposals.

I then ended my time on the executive board as the Co-Director of the club, taking charge of scheduling, organizing and coordinating the club for the past year. Everything between football road trips, FM airtime allocation and ensuring that our coverage from top to bottom remained as exceptional as it had been my previous three years. All those past directors had set a high bar for what WZBC Sports means, and I hopefully completed the year continuing the execute on the promises for exemplary student ran coverage of BC Athletics.

The greatest offering that WZBC offers is the ability to broadcast games both on and off campus. I retire with 52 games on my record, across 6 sports. I owned a record of 27-24-1 in these contests (the one is not a tie, but a game that was called a no-contest). However, before the vast range of experience’s, I was a freshman on color commentary for UConn Hockey. It was my first broadcast with Steve McAlee and Scott Hill. Hockey won that game and I can still remember breaking down Miles Wood’s go-ahead goal. 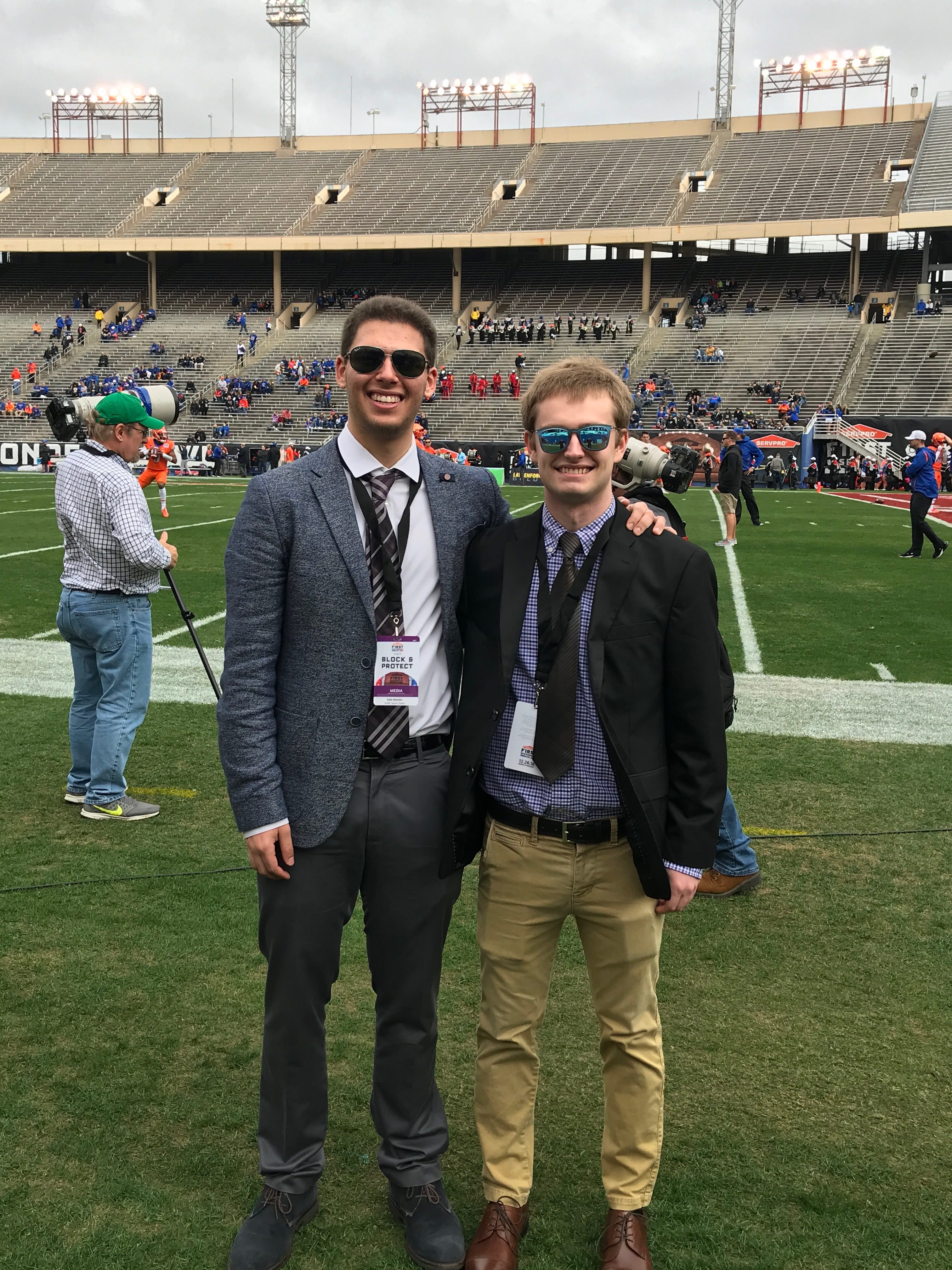 Ben and myself at the Servpro First Responders Bowl – Fall 2018

Only a few weeks later I joined then director Kevin Fritz, and the upcoming director, Anthony Iati as a color commentator for BC vs. UNC basketball. I was in disbelief when I saw my name on the most high-profile basketball game of the year, I was just a freshman getting my feet wet, but Kevin had faith in me. The experience was incredible, BC ended up losing in a heart breaker, but Conte was electric and it showed what is possible on a broadcast.

Since then I have been able to call Conte Forum, Alumni Stadium, Shea Field and the Harrington

Athletics Village home and learned these complexes inside and out. On the road, I have been to TD Garden, Madison Square Garden, Fenway Park, The Cotton Bowl, Northeastern, Harvard, Florida State and The University of Rhode Island. Having press access to such historic and famous locals will be memories I cherish for the rest of my life. Whether it be talking baseball with scouts before a game at Fenway, standing on the ‘Nole at Florida State, or experiencing a bowl game being cancelled due to lightning down in Dallas.

Outside of the main “work” of the club, if you can call it that, Graz’s opening line stayed true, I will remember the banter with the friends in this club as much as anything. Whether it is the conspiracy theories that Graz would tell at the meetings, or the ridiculous pictures Delo would send in our GroupMe. There are those who trusted the process, bowed down to Brady, or cried with me about the Jets. Quinn Kelly and his infamous mullet joined by TJ Hartnett chucking hot dogs as the football MC. Randomly running into Ryan Short at most games and riding in a Mustang with Casey Hague. Or the trips to MSG, Tallahassee and Dallas with Ben Neuwirth and grabbing weekly lunches with Matt’s – Marasco and Sottile.

These memories are only some of the countless that I can recall over the past four years, all of which bring countless smiles to my face as I look at the WZBC Sports Radio sweatshirt and have all the flashbacks rush to me.

Now I have graduated Boston College, and WZBC Sports Radio has been one of the most, if not the most defining part of my four years on the heights. I hope that I have left the club in a better place than I inherited it. We continue to have the talk shows, game coverage, Sports Saturday. Our social media presence has increased with Twitter and Instagram taking off, the website is filled with articles and podcasts that tell stories like these, those about the teams on campus and everything in between.

There are countless people that I have to thank for making my four years as a WZBC Sports member so incredible, I will start with my three AM show co-hosts, Alex Ackerman, Austin Nardi and Andrew Lynch. The litany of Executive Board members who have joined me in making this club function – Kevin Fritz, Anthony Iati, Casey Hague, Ryan Short, Scott Geyman, Michael Graziano, Jake DeLorenzo, Connor Hawley, Steve McAlee, TJ Hartnett, Quinn Kelly, Landon Komishane, Al Preziosi, Andrew Linnehan, Ashley Sachdeva, Dan Coates, Dan Emery, Zach Sluka, JD Biagioni, Matt Marasco and Jack Salmon. After reading that list, three people will notice their names missing and that is because they deserve to be separated. Next year, Matt Sottile and Sam Parsons will take over as Co-Directors and they have been exemplary members for the past three years and I have full faith in them to continue this club’s growth and continued excellence in covering BC Athletics. Finally, thank you Ben Neuwirth, my Co-Director for this past year, and this club would not be able to function the way it has without Ben by my side. 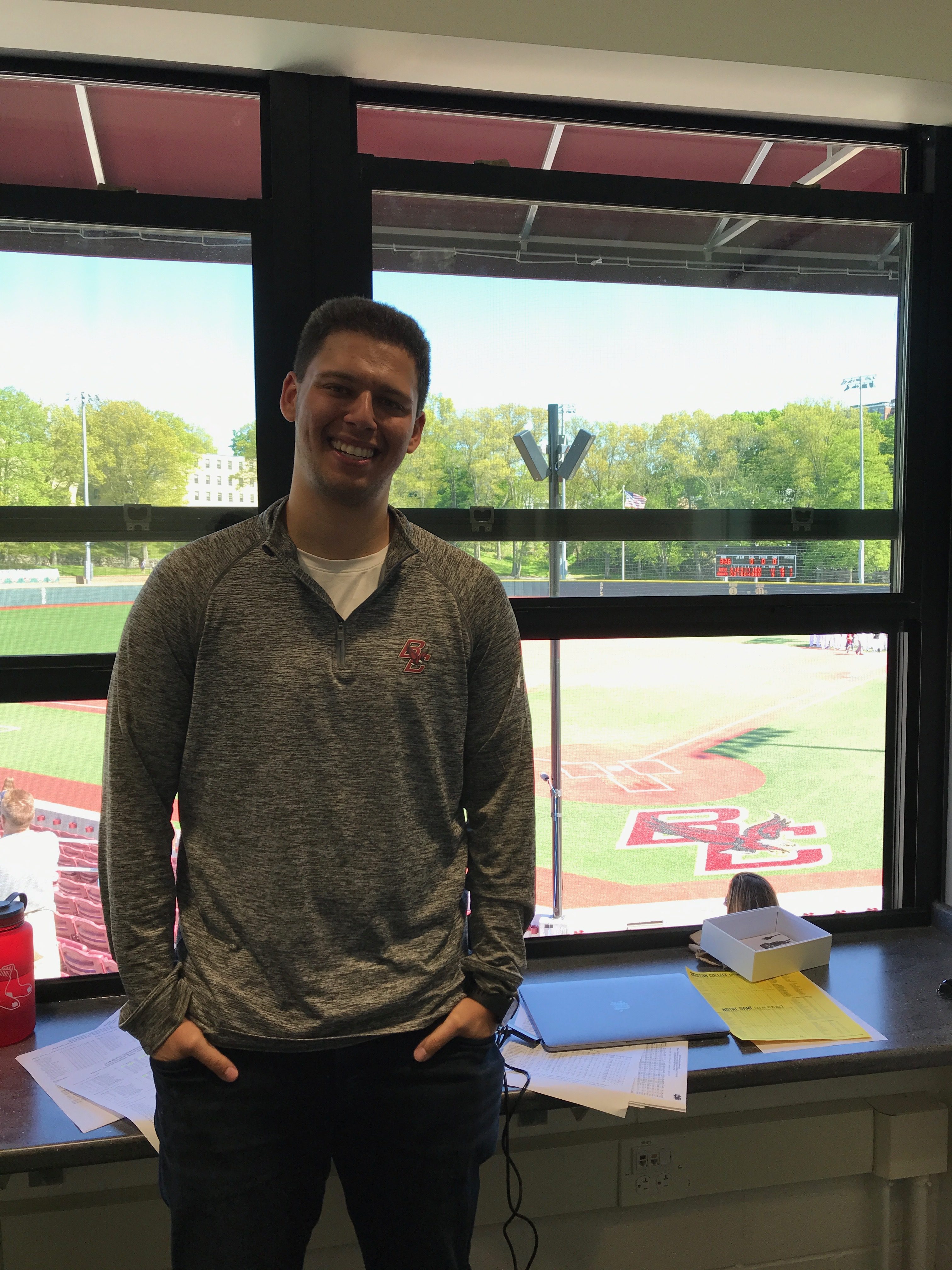 Me after my FINAL broadcast vs. Notre Dame – Spring 2019 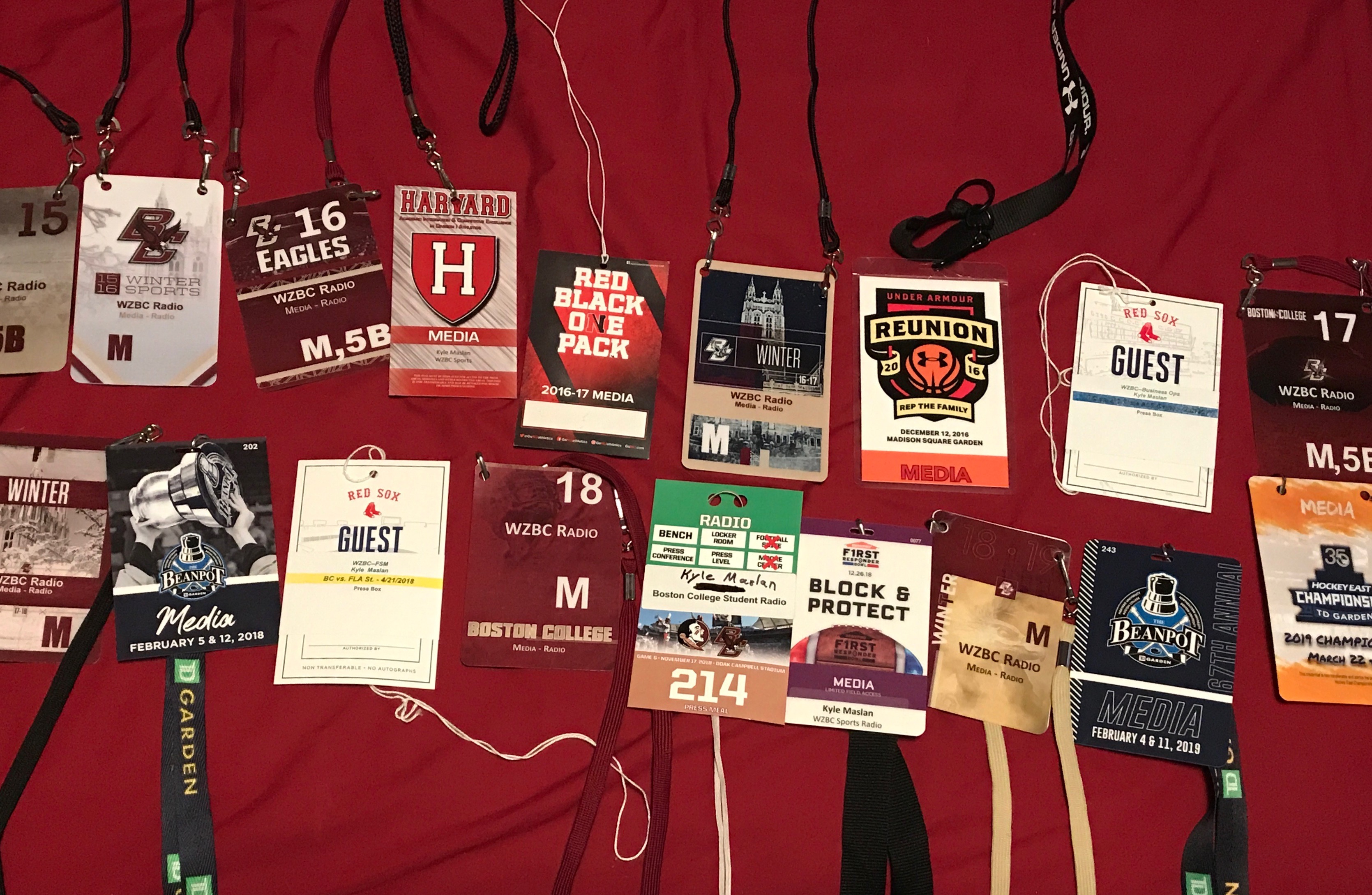 A collection of press passes from my career

← Birdball Clinches a Spot in the ACC Tournament Semifinals
Future Eagles: An Early Look at BC Hockey’s Freshman Class →